Home Maps Researching the History of Your NYC Ancestor’s Home 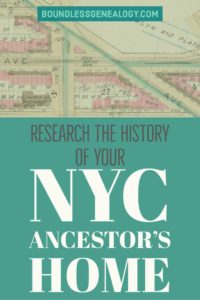 Do you find every aspect of your ancestor’s life fascinating like I do? From the occupation they practiced, to the type of clothes they wore, to the food they ate and the home they lived in, I really enjoy learning every detail I can about how my ancestors lived. When I was in NYC on my recent trip, I had the chance to dig a little deeper into the way our NYC Finlay cousins lived in Brooklyn from the 1850s-1920s.

My first day in New York City, the New York Public Library held a class titled: Researching the History of Your New York City Home taught by Philip Sutton, a librarian with the Milstein Division of U.S. History, Local History & Genealogy. It was the only genealogy-related class held at the library the week I was in town, so you better believe I wasn’t going to miss it. When I arrived, I wasn’t surprised to see that I was the only person there under 40 (or 50 for that matter); I am used to being the youngest genealogist in the room… but I digress.

Mr. Sutton began the class by telling us that while a study of the history of a NYC home isn’t directly a genealogical study, it can tell us a lot about the lives our ancestors lived. In researching the history of a building, he gave us steps to identify the building by block and lot numbers, visualize it through maps and photos, identify the owners it has had, determine when and by whom it was built, find out who the residents of the building were through time, and what those residents were like. I will not repeat my class notes in their entirety here, as Mr. Sutton has done an excellent job of that in a NYPL blog post called “Who Lived In a House Like This? A Brief Guide to Researching the History of Your NYC Home.” However, I will walk through the steps I took following Mr. Sutton’s class to learn more about the Finlay cousins and how they lived in Brooklyn from the 1850s-1920s.

Step 1: Identify the block and lot number of the building

As you probably already know from your genealogy research, street names and addresses often change over time. So, we need a more stable way to identify the building we want to research. For NYC buildings, that will be most commonly the block and lot number where the building was erected. I already had two addresses the Finlays lived in from New York city directories. I decided to focus on the address they lived at for a couple of decades: 134 Flatbush Ave., Brooklyn.

With the Brooklyn address in hand, I headed to the Maps department of the NYPL, which is just two doors down from the Milstein Division. All the maps are kept in closed stacks, so I gave the librarian the address I was seeking and the time period. He had two maps and an atlas pulled for me. Now, these maps are also available digitally on the NYPL website. But, since I was there in person, it was a delight to see the maps in person and peruse them up close.

The map showed additional information about this address: it was located in block 27, lot 10a, between Atlantic and Pacific, near 4th Street, and the block ends in a tight triangle corner. The color coding on the map also told me that the house was made of fireproof material. With the block and lot numbers, and the cross streets, I was ready to move to the next step of my research.

Step 2: Visualize the building through maps and photos

This step was a very fun one for me as a visual learner. Maps and photos are the “icing on the cake” of genealogy as far as I am concerned. On the NYPL Digital Collections site, I looked for both maps and photos of 134 Flatbush Ave. However, searching this collection for a specific address is very unlikely to bring up any results. Instead, you would search by the cross streets. I used the search terms “flatbush atlantic” and “flatbush pacific” to find these photos and maps:

The next map chronological map in the collection was made in 1908, and many of the buildings on the block of 134 Flatbush Ave. remain the same as they were in the 1886 map. However, some changes can be seen on the street and blocks nearby, including the addition of the subway station and the elevated train station. Modernization was obviously changing the face of the neighborhood. Also, I noted the the all-important block and lot numbers of 134 Flatbush Ave. had changed: block 927, lot 20.2Lionel Pincus and Princess Firyal Map Division, The New York Public Library. “Plate 4: [Bounded by Atlantic Avenue, Bond Street, Schermerhorn Street, Flatbush Avenue, Fifth Avenue, President Street and Court Street.]” New York Public Library Digital Collections. Accessed December 9, 2017. http://digitalcollections.nypl.org/items/510d47e2-1432-a3d9-e040-e00a18064a99 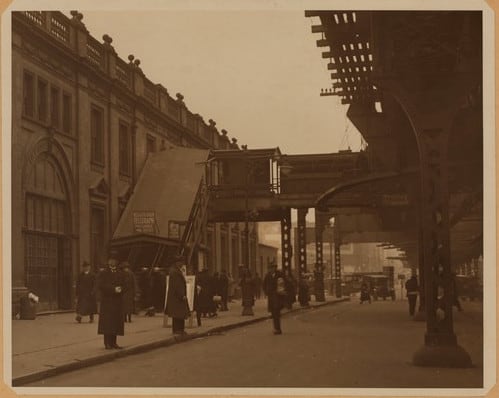 By 1929, some of the old buildings remain with shops on the main floor, and likely still residences above. In this photo, the Nathan Strauss meat and seafood shop is the main feature on the corner.4Irma and Paul Milstein Division of United States History, Local History and Genealogy, The New York Public Library. “Brooklyn: Pacific Street – Flatbush Avenue” New York Public Library Digital Collections. Accessed December 9, 2017. http://digitalcollections.nypl.org/items/510d47dc-b01f-a3d9-e040-e00a18064a99 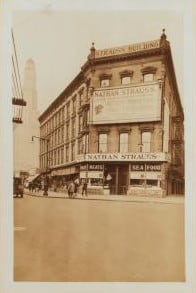 In the top image, created in 1934, several old tenement buildings can be seen behind the elevated train track and the shop signs. By the time of the bottom photo in 1940, taken in the same location, you can see that many buildings have been demolished and the whole face of the neighborhood has changed dramatically.5Irma and Paul Milstein Division of United States History, Local History and Genealogy, The New York Public Library. “Brooklyn: Flatbush Avenue – Pacific Street” New York Public Library Digital Collections. Accessed December 9, 2017. http://digitalcollections.nypl.org/items/510d47dc-cdda-a3d9-e040-e00a18064a99 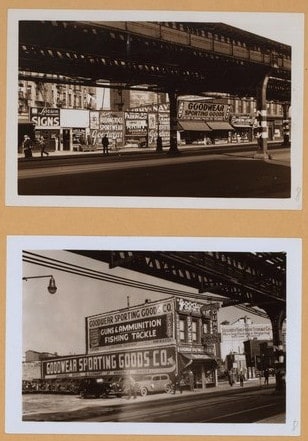 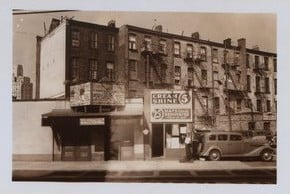 Although I was unable to clearly identify 134 Flatbush Ave in any of these photos, the maps and photos gave a good understanding of the structure of the neighborhood. The changes that occurred over the 40 years the Finlay cousins lived in the area were also evident in the maps and photos.

Because I was fairly certain that our Finlays were always renters and not owners, I skipped this step to save time during my limited research time frame.

Step 4: Determine when the building was built and by whom

Again, I skipped this step in the interest of time. However, in looking for photos and maps of the building, I was unable to find the 134 Flatbush Ave. building by the time of the tax photos taken by the New York City government in 1939-1940.

This is a view of the block today as it appears on Google Maps:

Step 5: Find the residents of the building

I already knew that several of the Finlay siblings lived at the 134 Flatbush Ave address over the course of 20 or more years from the 1880s to the early 1900s. Out of curiousity, I conducted a newspaper search for the address to see if could find any information about others who might have lived in this building and I found some interesting things.

In 1884, near the time the Finlays moved to the 134 Flatbush Ave. address, rent was advertised as $27 a month for 7 rooms.
Found on Newspapers.comFor a time, a Confectionery Shop was a tenant of the main floor shopping in the building.Found on Newspapers.comThe occasional scandal popped up at the address as well, such as this poolroom raid that occurred in 1902 in the back room of the cigar shop on the main floor.Found on Newspapers.comI could expand my residents search by looking in Brooklyn city directories that are searchable by OCR and use the address as my search term instead of a person’s name. I could also take a more detailed look at the individuals listed in the U.S. Federal Census near the Finlays.

In my newspaper research, I came across several want ads and social mentions that also gave insight into the lives of residents of 134 Flatbush Ave.

Find the History of Your Ancestor’s Home

Again, resources for the above steps can be found in detail in this blog post by Philip Sutton, which was a companion article to the class that I attended:

Who Lived In a House Like This? A Brief Guide to Researching the History of Your NYC Home

Some additional blog posts from the NYPL website give additional details and resources for building history research:

How to Find Historical Photos of New York City

A similar research project could be done for an ancestor’s home anywhere in the U.S. The resources will vary, but the results may be insightful.

Have you researched the history of a home of your ancestor (whether they lived in NYC or elsewhere)? I haven’t singled out the history of a particular dwelling before this project, but I have done something similar by studying the detailed history and layout of a small town where many of my ancestors lived. If you complete a project like this, I’d enjoy hearing about it!