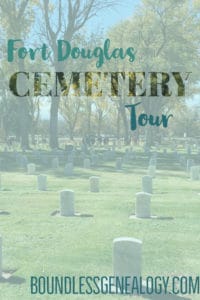 My family and I attended the Fort Douglas Cemetery Tour this past weekend. This event was an awesome, family-friendly, non-creepy Halloween-time cemetery activity… and we LOVED it! Several actors and actresses were on-site in character and costume to tell us the stories of some of the individuals interred in the cemetery. Read on to learn about some of the fascinating people we met at the cemetery. 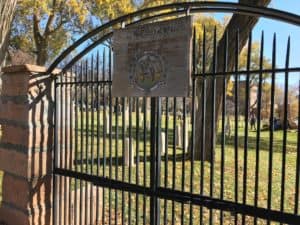 Fort Douglas, originally Camp Douglas, was established in the Salt Lake Valley in 1863. The men stationed there were involved in the Battle of Bear River (or Bear River Massacre, depending on your perspective), and many lost their lives immediately or in the weeks after that battle. They were among the first buried in the Fort Douglas Cemetery. Two of the soldiers from that battle told us their story and how they assisted each other after they were injured. Sadly, both men died within weeks. They are buried two spots apart, in a long row of soldiers from their regiment. 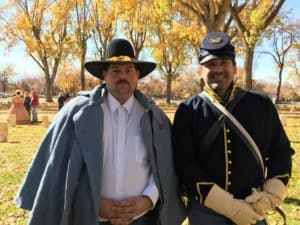 Two of the soldiers involved in the Battle of Bear River

Next we were told the story of Harriet Adelaide Benham, born in Louisiana in 1842. Very little is known about Harriet, except that she spoke French. She moved from Louisiana to Nebraska at some point, where she met her husband. She migrated with her husband from Nebraska to Utah with the army, where she got sick and died. She was buried in the Fort Douglas Cemetery. The historians at the Fort Douglas Museum are trying to learn more details about her life. 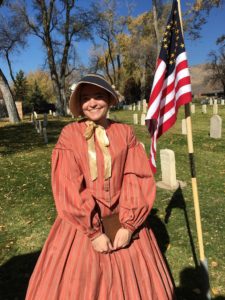 Tony, the canine veteran hero of WWII, and his handler next told us his tale. He served faithfully and saved many lives as part of the 44th Infantry. Tony was one of the lucky 50% of dog veterans that was able to return to regular family life after the war. He died in 1949 and was buried in an unmarked grave at the Fort Douglas Cemetery. 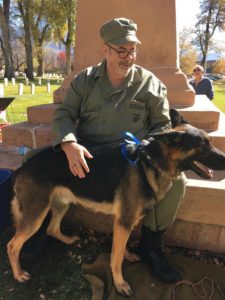 Tony and his handler 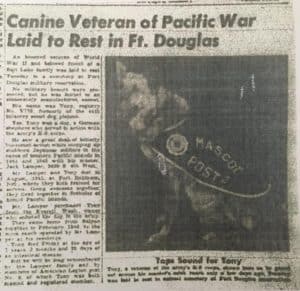 Charlotte next told us her story. She was born in England in 1822. Charlotte was widowed twice as she made her way to America, through Missouri, and finally to Utah. She remarried the third time to Sgt. Charles Cooney at Camp Douglas in 1864. The next February, the couple’s first child (but Charlotte’s 8th), Charles, was born. Charlotte and her infant died two months later in April 1865. They were buried together at the Fort Douglas Cemetery. Charlotte’s story was very interesting to me, as all the stories were. But the COOLEST thing happened while we were there, and it gave me chills. While “Charlotte” was telling her story, a woman came up and said, “Charlotte was my great-great grandmother, and let me tell you more of her story.” Then she proceeded to tell more details that she knew from her family history research. It was so cool! So, I asked to take a picture of “Charlotte” with her great-great-granddaughter. 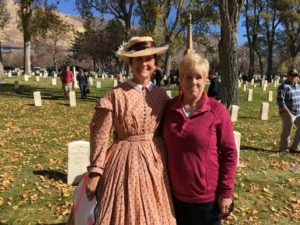 “Charlotte” and her actual great-great-granddaughter 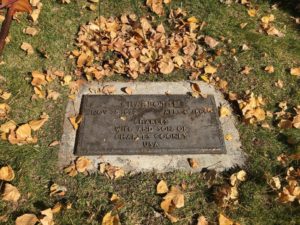 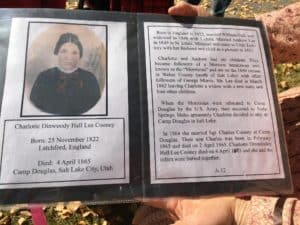 What does all of this have to do with genealogy?

Well a couple of things. First, cemeteries are the final resting places of our ancestors and should be treated with respect. I would prefer to see living history tours such as the one we attended at the Fort Douglas Cemetery, where we remember those who came before us, instead of fright-producing activities that go on in cemeteries around this time of year. In fact, I am so inspired, I may consider spearheading a similar living history event at a cemetery located closer to my home.

Second, it was a great reminder to me that human memory is short, and many of those buried in the cemetery are unknown or only partially known to our modern knowledge. It reminded me why I am passionate about genealogy research… I love learning the story of each and every person from my family tree, recording their story, and sharing it with others so their memory can live on. Fort Douglas Museum is gathering more information on several of the people buried at the cemetery and I was asked more than once to send in any information I can find on the people we learned about today. I may just take them up on that. As a genealogist, I am intrigued to know more about the people buried there. What is their story??

Have you ever attended a living history tour at a cemetery? I am so curious to know how many cemeteries or societies remember the dead in this way.