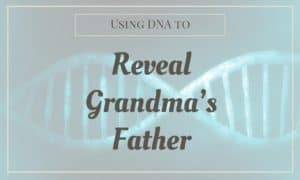 What’s a genealogist to do when they come to a line with an illegitimate child and an unknown father? Well, today we have the marvelous tools of DNA and genetic genealogy to help us overcome a blocked line like this.

I have to admit that I am new to the scene of genetic genealogy and am just wetting my feet with my first project. But, it’s a doozy. And it has me curious enough to use all the tools available to solve it, including a first foray into DNA. You see, my husband’s grandmother, Rose, was born out of wedlock. Her birth certificate lists a father and an address. Unfortunately, the person named, August Saunderville, doesn’t exist! And the address listed? It was a boarding house with dozens of very transient boarders.

My husband’s aunt is also a genealogist and we have been collaborating on this project. As we searched the paper trail for this mysterious “August Saunderville”, we started to suspect that Rose’s father might really be one of the Launderville brothers who lived in the Cleveland area around the time of her birth. Unfortunately, the paper trail was only getting us so far. One brother was a printer, lived in the suburbs in a nice house, and seems to have been quite settled with his wife and children. The other brother was constantly moving, changing jobs, and changing relationships. We suspected the second brother was the father; he seems more the type to “love ’em and leave ’em”. But, the paper trail really didn’t give us a direct connection between either brother and Rose’s mother.

This mystery is only a few generations back, so it is entirely plausible that we would be able to identify second cousins or closer relations within the Launderville family through DNA matches if we were right in our hunch. So, Rose’s children agreed to take DNA tests to help us identify her father. What a thrill when the results came back and the children do tie in as cousins with the Launderville family. At this time, we have confirmed that Rose belongs in the Launderville family, but we have not pinpointed which brother is her father. All of Rose’s children have also been identified as part of the genetic community of “French Settlers along the St. Lawrence,” and have a small percentage of Native American blood (which surprised them all!) Both of these genetic communities are another direct tie to the Laundervilles, whose father was French and mother was from the Chippewa Tribe. 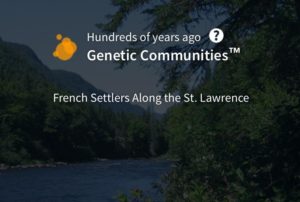 I am still hard at work on the paper trail hoping to identify specific descendants of both men to see if we can talk them into having a DNA test done to confirm which Launderville brother was Rose’s father. In the meantime, this whole process is fascinating and thrilling!

Have you been able to uncover an illegitimate line through DNA testing?

This blog post is part of the July Genealogy Blog Party: DNA Discoveries with Elizabeth O’Neal. Visit her site to read all the interesting DNA discoveries other genealogy bloggers have made!